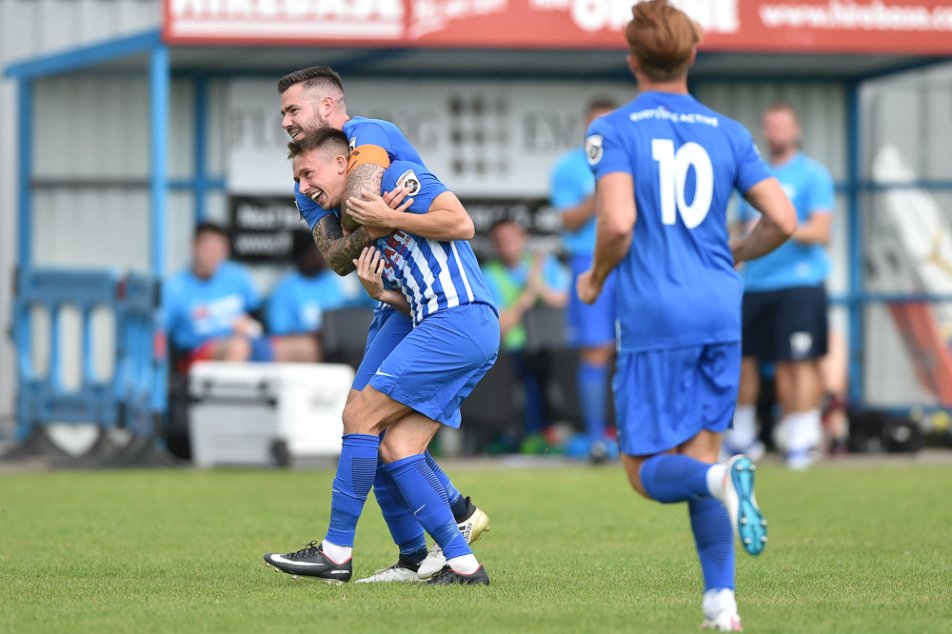 BORO breezed to a comprehensive 4-0 victory over Warwickshire neighbours, Leamington, in the LDJ Solicitors Stadium sunshine. It was Boro who had the first sight of goal in the opening minutes when Alex Henshall, making his first start of the season, cut inside before firing just inches wide. Henshall was involved again shortly afterwards when his strike from distance was gathered at the second attempt by Tony Breeden in the visitors’ goal as Ashley Chambers looked to take advantage of the rebound. Boro were looking lively and deservedly took the lead on nine minutes when Jordan Nicholson embarked upon a positive run and as a shooting chance opened up in front of him, he was able to fire past the helpless ‘keeper. A long ball out of defence by Brad Gascoigne picked out an intelligent run from Brady Hickey who beat the offside trap only to lift the ball over. After Kurtis Revan had seen an effort tipped over by Dean Lyness in what was the visitors’ first effort on goal, Boro managed to double the advantage on 20 minutes courtesy of a sweet strike from the lively Henshall. Some neat play ended with Boro further extending our lead on the half-hour as Nicholson stayed cool to guide the ball beyond the advancing ‘keeper and make it 3-0. There was a booking for Courtney Wildin for a foul on the far edge of the area but the resulting free-kick came to nothing. It was an energetic and positive display by Boro as we looked a threat every time we went forward and there was a good chance right on the stroke of half-time but Chambers elected to shoot rather than play in Henshall to his right and the visitors were able to clear. The second half began with a corner for the visitors, which was headed just over by Junior English. As the visitors looked to make a bright start to the second period, the wind was knocked out of their sails when Jamie Hood was dismissed for violent conduct for an incident as the ball went out of play. With 65 minutes on the clock, Joe Clarke got in a powerful drive that was well kept out by Dean Lyness and from the resulting corner, Wildin cleared off the line. Boro further extended our lead when Brady Hickey fired home from distance into the top corner. It was a sweet strike to make it 4-0. It was a fitting way to round off what was a convincing display from Boro as we took the bragging rights in this Warwickshire derby.